When Ted Nelson invented hypertext, his ideas were much more ambitious than any one of their realizations. In particular, links were always meant to be bidirectional: if A links to B, B knows this. But when Tim Berners-Lee invented the web, he had to throw a lot overboard to meet the constraints of the time. The early web was served as static HTML on file servers, dynamic server-side rendering was a few years away, and this precludes a lot of features that require live servers and databases.

The release of Roam was a Cambrian explosion in the previously moribund field of personal information management, where up to that time your choices had been Evernote and org-mode. It led to a steady stream of copycats: Obsidian, RemNote, Logseq, etc. Roam’s key feature was bidirectional links, like in the dreams of Nelson. All of its successors have brought this feature along.

And here’s the twist: MediaWiki has had bidirectional links for twenty years. But they are extremely deemphasized: there’s a tiny link in the sidebar, “What links here”, that when you click on it shows you the list of backlinks.

I thought this was relatively common knowledge, and was surprised when I tweeted about it: 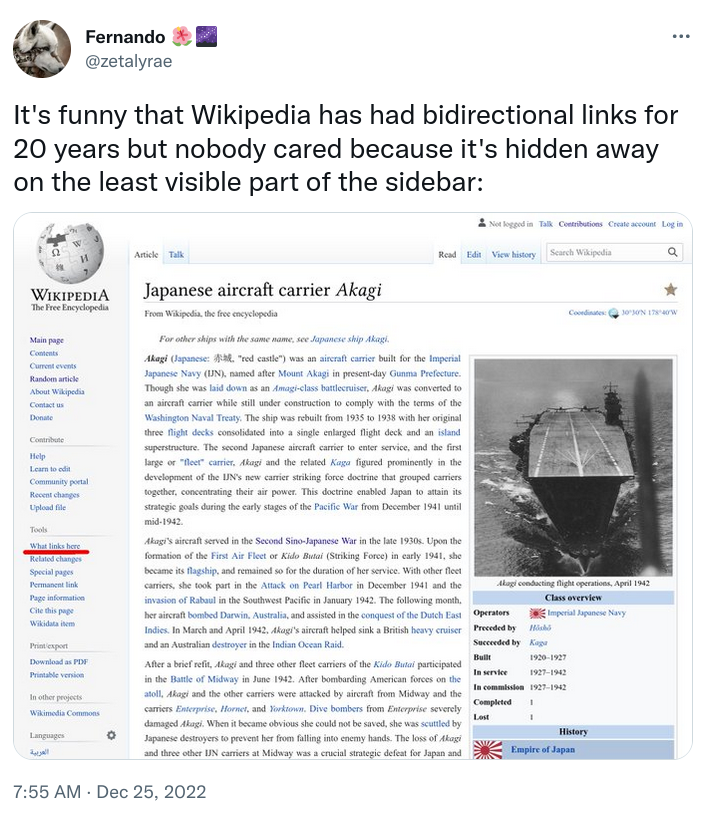 It turns out many people don’t know this! I suppose this is a lesson in how bad UX can condemn a feature that could have been revolutionary to obscurity, such that it took twenty more years for someone to realize that backlinks deserve to be put front-and-center, and ignite a revolution in information management.

And how old is this feature? On a quick search, the earliest mention I found is on the release notes for version 1.1, from 8 December 2003: